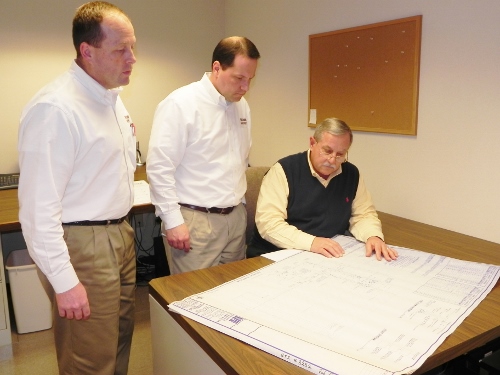 It has been 40 years since Dennis Sollmann started his electrical contracting business as a one-man operation located in a garage at 634 Fulton Street, Sidney. Time has sure passed by and after years of many long, hard-worked hours, the business has grown to become one of the leading electrical contracting firms in Southwest Ohio. Sollmann Electric Company, presently located at 310 E. Russell Rd., Sidney, installs electrical systems for commercial, industrial, institutional, and residential facilities.

Dennis graduated from Anna High School and while there was enrolled in the Diversified Cooperative Training Program for electrical trades, which is comparable to today’s Upper Valley Career Center’s electrical trades program. That schooling enabled him to secure a position with Zimpher Electric in 1966 where he worked for four years. Dennis then enlisted in the Air Force reserves while also working for other electrical contracting companies. For extra income, Dennis did miscellaneous electrical jobs in the evenings. These side jobs kept increasing and in 1973, at the age of 22, Dennis made the decision to start his own business, Sollmann Electric Company.

Dennis comments “Let this be a lesson to young people today! Learning a trade at schools like Upper Valley Career Center, along with hard work can lead to many career opportunities like owning your own business”. For the past 40 years Dennis has run his business and with his wife Rita Sollmann, raised his family of three sons; Jeramie, Ryan, and Chad. Recently Dennis has handed over the reins of his company to his eldest son Jeramie Sollmann, and Tom Holthaus. Jeramie joined the company in 2000 and is now the president of Sollmann Electric Co. He is a graduate of Lehman Catholic High School and has a Bachelor of Science Degree in Electrical and Computer Engineering from The Ohio State University. Jeramie is also a certified Professional Engineer with the State of Ohio and holds a State of Ohio Electrical Contractor’s license. The company’s vice president Tom Holthaus has been with Sollmann Electric since 1988. He is a graduate of Fort Loramie High School, a certified journeyman electrician, and holds a State of Ohio Electrical Contractor’s license. Dennis has now taken the role of chief financial officer and will continue to work closely with Jeramie and Tom.

Dennis comments, “I want to thank our great employees both past and present. Without them the business could not have succeeded like it has. Some of the veterans I would like to mention are my brother Gary Sollmann who joined the company in 1975 and Kenny Klopfenstein who started in 1977. Both of which are still working for Sollmann Electric today.” “I have been very blessed with an excellent crew and staff who have always been committed to excellence”. “Now it is Jeramie and Tom’s turn to lead the company into the future for another 40 years!” You can call Sollmann Electric Company at 937-492-0346 for all of your electrical needs.