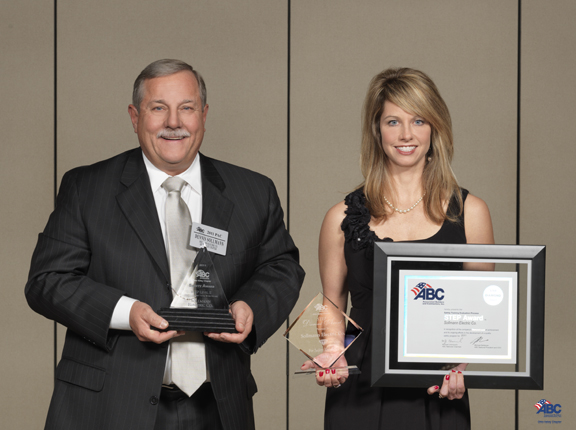 Sollmann Electric Co. recently attended the Ohio Valley Chapter Associated Builders and Contractors, Inc. (ABC) Excellence in Construction Awards Gala where they were presented with five awards. “We were pleasantly surprised when are name continued to be called to except the awards”, comments Dennis Sollmann. The Ohio Valley Chapter ABC includes contractors from 35 counties residing from the Northern Kentucky area to the Lima area, and parts of Southeast Indiana.

Sollmann Electric was presented with the Safety Training and Evaluation Process (STEP) II Award , which is given to STEP Platinum or Diamond winners that have an outstanding safety record with minimal accidents. Sollmann Electric also took home the STEP Diamond Award.They were the only contractor from the Ohio Valley ABC to win the Diamond award. STEP Diamond awards are presented to contractors that meet certain criteria relating to OSHA incident rates and Bureau of Workers Compensation experience and loss ratios.

Sollmann Electric was awarded the Award of Excellence for its work on the St. Marys City School District New Memorial High School & New Middle School project in St. Marys, Ohio. The 210,000 square foot new construction project was completed in 17 months. At the time of construction approval, this was the largest square footage to time-line ratio that the Ohio Schools Facilities Commission had ever allowed. The facility was built to serve grades 6 through 12.Jeramie Sollmann, President of Sollmann Electric Co., was the Project Manager, John Sink was the Project Foreman, and Cheryl Gallimore wrote and submitted the award winning entry.

In addition to the excellence award, Sollmann was presented with the Members Building Together Award for the St. Marys School project.This award was given to the contractor who used the most ABC members on a project, which can include lower tier subcontractors, material suppliers, and equipment suppliers.

Dennis Sollmann comments, “At the end of the night, we got a big surprise.”“Sollmann Electric was presented with the Subcontractor Project of the Year Award for our work on the St. Marys New High School/Middle School Project”. “I was so proud that our project was picked out of all of the other projects for such a prestigious award”.